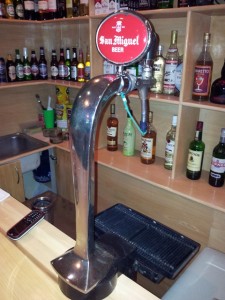 Over the past couple of months, we have been working closely with San Miguel Corporation to get draft beer on tap available at the Pub.  Of course as everything goes in the Philippines, it typically takes a while to get almost anything accomplished.  But luckily we were able to get them to install the keg for us today.

As far as I know, we are the only bar and restaurant in the center of Cebu (Fuente area) that offers draft beer on tap.  What we now have is actually San Miguel Pilsen Beer (SMB) for our draft beer on tap.  Although it is pretty similar to the bottle version, of course draft beer on tap is different in taste and something we believe our customers will appreciate.