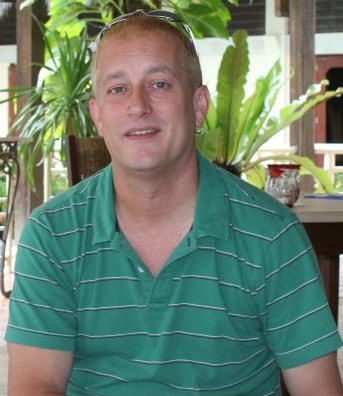 Chef Larry Marshall is the Executive Chef of Marshall’s Irish Pub Bar & Restaurant in Cebu, Philippines.  Chef Larry started cooking at the young age of 5 years old under the tutelage of his mother, Elizabeth.  His Uncle, Larry Vass, also loved to dabble in gourmet cooking which rubbed off on him.  After traveling around the world and eating almost every cuisine on the planet, Chef Larry was able to hone his skill around the kitchen to come up with fabulous dishes that everyone always raves about.

Although Chef Larry is proficient cooking almost any cuisine, he decided to focus many of his dishes around his ancestry of being Irish.  This later led him to create the design and concept for an Irish Pub to showcase many of his personalized dishes for the nightlife in Cebu.  Since Chef Larry resides in Cebu, he saw a great need for a great Irish Pub Bar & Restaurant for Filipinos and foreigners alike, to be able to experience not only the food, but the drinks and atmosphere that an Irish Pub brings even if you’re not in Ireland and to become one of the most sought after bars in Cebu.

The name Marshall was actually spelled as Marshill prior to the 1700’s mainly due to how the Irish pronounce it.  Chef Larry Marshall’s Great x7 Grandfather was Jacob Marshall II (or Jr.) of County Tyrone, Ireland and the restaurant is dedicated in his name.  He was born in 1693 and married Ann Griffith in 1718.  They had 2 sons, John and William.  John was born in 1720 and William in 1724.  From 1726 to 1729 there was a great famine in Ireland due to poor crops.  The Marshall clan were farmers and therefore were hit very hard by this.

So in 1729, Jacob and Ann decided they would try their luck in the “new world” which would later in 1775 become the United States of America.  At this time, many Irish had the same idea and crowded onto ships heading to the new world.  Conditions on the ships were very bad due to over crowding and many died during the journey.  The same holds true for Jacob and Ann who were buried in Pennsylvania upon arriving.  John and William travelled with others to North Carolina to settle at just the ages of 9 and 5 years old.  Both John and William became farmers, both got married and both had 11 children each.  Chef Larry is a direct descendant of John Marshall.

Being Irish and being farmers, meant when crops were good, there was lots of great home cooked meals.  These traditions were passed down from father to son and mother to daughter.  Throughout the years, great Irish cooking has been a passion for people from Ireland.  Therefore, the concept of Marshall’s Irish Pub Bar & Restaurant in Cebu is to provide home style cooked Irish food in a fun and friendly atmosphere to enhance the Cebu nightlife.  Come and see for yourself one of the best Cebu bars.